Kwik Kopy, the corporate design and printing experts, needed an addictive online game to promote their products and services to a new audience. The Take Flight promotion allows businesses to compete in a danger-dodging paper plane journey through the streets of New York. Entrants have the chance to win from a range of prizes or enter to win a trip to New York.

In creating Take Flight, Sharkey Media’s web design and development team had to ensure the game not only promoted Kwik Kopy but was also fun for other businesses to play. The promotion incorporates social media allowing word of the game to be spread between friends and colleagues, further promoting Kwik Kopy. The Take Flight promotion has also enabled Kwik Kopy to expand its database of potential customers to include those that enjoyed the game.

Allowing high scores to be recorded on the results board, Take Flight has encouraged some healthy rivalry amongst participating businesses. 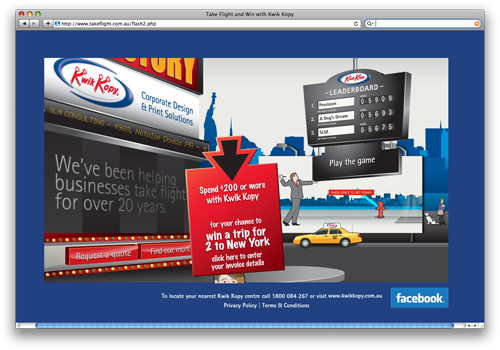